I was reading an entry in Shauna Niequist’s devotional Savor the other day entitled “Permission.” She talked about being worn out from all the activities and demands in her life and described several friends and family members telling her it was okay to let some things go. Being in a “worn out” phase recently, I sighed and thought, “Yes, I need permission from the people in my life to let some things go.”

That started a dangerous train of thought for me. I couldn’t imagine the people in my life giving me permission to back off on anything. I noticed a bit of envy seeping in that Shauna has such a supportive family when I feel like my family and others demand a lot from me. Then I felt of sprig of bitterness sprouting up toward those people. And the negativity kept going.

Then some things happened this week that shifted my thoughts.

The first draft of a literature review was due for my research project. I had been working on it for several months already, gathering sources, outlining the major points, and clarifying my thoughts. I had not actually started writing it though until this week. Some might have said this was due to procrastination. I would have argued that it was because I simply had not had time to devote to it. Then, when it came to the time I had scheduled to work on it, I simply couldn’t. I practiced brush lettering strokes. I cut my toenails. I eradicated the morning glories that were taking over a flower bed. I wrote out a schedule, hoping that if I could see how few hours I had left to work on it I would be able to focus on it. I just couldn’t. I was mentally and physically exhausted, and the work of writing, which normally is very easy for me, seemed impossible.

I also, as part of my anything-but-writing distractions, got involved in an discussion about mommy guilt and the standards we feel we need to meet in an online community that I have been part of for years. I typed out words of perspective and encouragement to moms of children much younger than than my kiddo about how they could decide not to stress about so many things because they are not very significant in the grand scheme. When their children are older, they will have much bigger battles to face, and they shouldn’t wear themselves out now. Some people appreciated my words. Some, not so much.

As I was thinking about that discussion, I realized how hollow my words felt to me. Not because I didn’t mean them, because I did. But because I was struck by how much time and energy I put into trying to meet the perceived needs and expectations and standards of others. Because I am exhausted and worn out right now because I fail to follow my own advice. Because I want to be known as the one who takes care of everyone and can do it all. Because I knew that a major factor in having such a difficult time writing my paper was because I felt like everything I was typing wasn’t as good as it could or should be. And I was paralyzed by it.

I looked at the time, 9: 30 p.m. on Thursday. Less than 21 hours until the paper was due, and I had to sleep and work all day during that time, too. I decided that it would have to be okay to fail. I sent an email to my professor telling her that I was going to be turning in what was probably the worst paper of my life. I was able to write then. I had to give myself permission to let go.

(To be fully transparent, I did end up taking off work Friday afternoon so I could actually finish the paper, even if it wasn’t what I wanted it to be–not because I needed a certain grade, but because turning in a completed first draft would make it easier for me later.)

Between the discussion on expectations and mommy guilt and my case of writer’s block, I realized that it isn’t other people that need to give me permission to let go. It’s me.

I’m the one who decides the expectations and standards I need to try to live up to. And no one else can do for me what I refuse to do for myself. I have to start by giving myself permission to let go.

If you’re tired and worn out, maybe you, too, need to give yourself permission to let go. 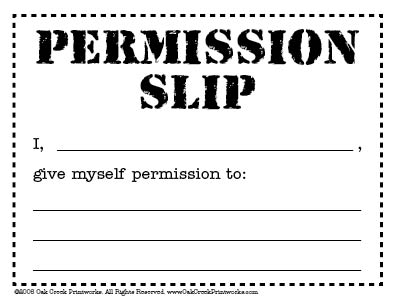 Sigh… Mom won’t let me eat her magazine.
Every day is Dog Day with this girl.
Happy Half Birthday to Karis Sidney Jean!
Hiding from the blow dryer after a bath.
“What is this place? What is happening?” -Karis, on her first ride through the car wash
Karis is contemplating the meaning life.
Loading Comments...
%d bloggers like this: